Basic Balinese Etiquette to Keep in Mind When Visiting Bali 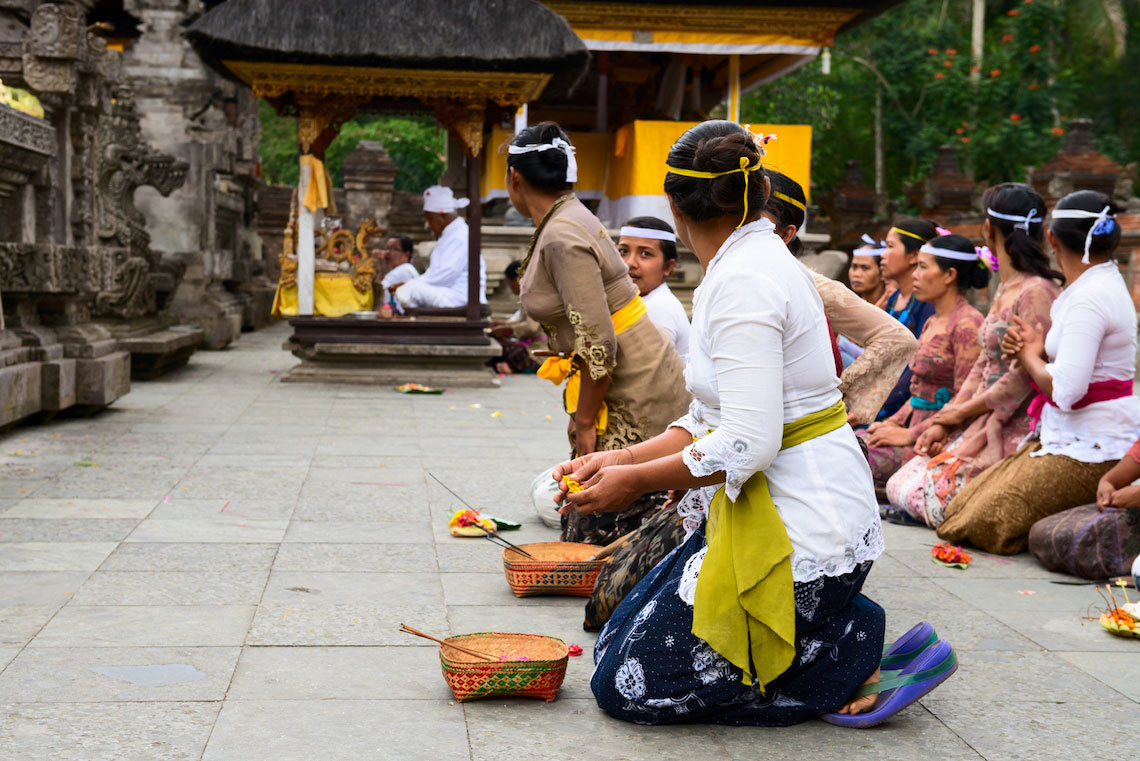 Basic Balinese Etiquette to Keep in Mind When Visiting Bali

A holiday in Bali is like being in paradise – you’ve got miles and miles of pristine beaches with crystal clear waters and an opportunity to immerse yourself in a unique ancient culture. But before you head to one of the most visited islands in the world, you have to know the basic do’s and don’ts so you won’t find yourself in hot seat with the locals.

Always Dress and Act Modestly – although Bali is one of the most popular tourist destinations in the world, the island is still very conservative. While you can lounge around the beach and resorts in skimpy outfits or without a shirt, you must dress modestly when out in town or at the markets. This doesn’t mean you need to wear long sleeves and pants amidst the hot climate, but appropriate clothes such as a shirt and long shorts or skirts are enough.

Touching among the opposite sex is also not appropriate in public, unless you’re within the confines of a resort or a popular area predominantly occupied by foreigners. Do the hugging and kissing in such places, or better yet, in private.

Greet Strangers with a Handshake, or also known as the Salam – when meeting people for the first time, offer them a handshake and a slight nod of your head. When a man is introduced to a woman, wait for her to offer her hand first. If she doesn’t, then don’t give out a handshake.

When offering handshakes to older people or those in authority, slightly bend the body facing the person.

Leave Your Footwear at the Door When Entering a Home or Temple – to show respect to a Balinese home or temple, people must leave their footwear at the door. Since homes and temples are considered sacred places, shoes and all types of footwear are seen to contaminate the cleanliness of such places.

Use Local Social Titles – when referring to someone who’s older than you, use their social titles before their given name to show respect for the elders. Use “Pak” for “Mr.,” “Mas” for “Mrs.,” and “Mbak” for “Ms.”

Wear a Sarong and Sash in Temples – a t-shirt and shorts combo is not appropriate for temple visits and you certainly won’t be allowed to enter. Sashes and sarongs are available in temples so make sure you wear these when visiting religious places and temples in Bali.

Never Show Displeasure in Public – if you are disappointed with a person or a service rendered, show your dissatisfaction in private. You can ask the person to have a talk in closed spaces, but never where there are other people who can see or hear you. Balinese people are very easily embarrassed and saving face is very important to them.

Honor the person’s dignity by telling the person your anger or displeasure where other people are not around.

Never Touch Someone’s Head – the Balinese people believe that a person’s soul resides in the head, which makes it the holiest part of the body. As such, never touch anyone’s head or hair, and don’t even think about ruffling a little child’s hair.

Never Use Your Left Hand to Hand Over Something to Another Person – Balinese people believe that the left hand is dirty. They see the left hand as impure because it is the hand Balinese people use for hygienic purposes. So always use the right hand when paying or when handing an object to someone.

Never Point Your Feet at Someone – the Balinese people consider the feet as the dirtiest part of the body and it should never be used to point at someone or something. When sitting down, never cross your legs in the “4” position, where your feet rests on the thigh or knee.

Do Not Empty Your Plate – when invited to dinner or party at a local Balinese home, do not leave your plate empty, but leave some few pieces of food to symbolize an offering to the gods. It also shows the host that you had enough to eat.

Respect Balinese Religion – the Balinese take their faith very seriously, so never argue in public or with a local about religion or politics. Balinese women also frequently place religious offerings on many sacred places found around the island. Outside areas of shops and homes may have flowers, food, and incense, so best be careful about walking in the streets. Never step on them as the Balinese believe you will upset the gods.

Take these dos and don’ts to heart and enjoy your holiday vacation in Bali without a glitch in terms of proper behavior. 14 Best Activities for Couples and Honeymooners in Phuket